We are pleased to announce that the wonderful Bobby Reed ( ex Kalibre )Will be joining us again at the Delmont Jan 2022 as resident artists with Pete Steel for the whole weekend along with Travis Logan, Dave Paisley, Steve Chase & Middy to complete an excellent weekend of pure country the likes of which can’t be found anywhere else 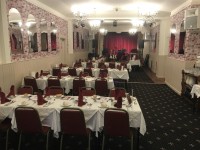 The Delmont Hotel in Scarborough was our next stop for a weekend of Real Country Music put on by Steve Chase and long term duo partner Middy. We have been attending this fantastic event for several years and have always found it to be the best in the calendar. Held in the small but very comfortable Delmont Hotel this is a real treat for lovers of true Country Music performed by the best country music artists on the British scene. Most of the audience have like us attended for many years which is a testament to the top quality of entertainment put on by Steve and Middy.

and each performing a set each evening. The artists this time were Best of Friends Duo (Steve and Middy, Travis Logan, Dave Paisley and the amazing duo Kalibre , who I had the privilege of hearing for the first time this weekend and what a treat that was. After our excellent evening meal the music was launched in fine style by our hosts Steve Chase and Middy with a great first set with great vocals and instrumental ability by these two very experienced artists Steve announced that the artists had all gotten their heads together with the object of going all weekend with no song repeated and this was achieved even though there was more than 16 hours of music to get through.

Travis Logan followed in the second set in his own incomparable style with his superb deep and powerful voice and brilliant guitar skills. Travis researches hundreds of country music classics and brings out songs that no one on the circuit does and then picks up his acoustic guitar to perform several of his great "Gunfighter "songs.

The third act on this first night was another great long time top performer Dave Paisley who like Travis performs all the best in traditional Country songs but in a quieter and more relaxed form. Dave performs lots of works by people like Lefty Frizzel and Bobby Bare and is a very accomplished guitar player and a very amusing and comical artist with his witty repartit in between songs adding to the all round entertainment.

Just when I began to think things cannot carry on at this superb level we were introduced to the last act of the evening Kalibre. This absolutely brilliant duo of Bobby Reed on vocals and guitar and the outstanding Bob Dixon on Pedal steel and Dobro just blew me away

completely. These guys have been together for many years and it shows in the quality of their performance. Immediately after their first song Bobby Reed kicked off his superb humour by making fun of Bob Dixon's deadpan appearance which added to their great show The excellent vocals from Bobby Reed and amazing faultless skill from Bob Dixon on both Pedal steel and Dobro was just beyond words and the instantaneous changes on these instruments was just beyond comprehension. This wound up the first night and sent those who wanted to back to their rooms more than satisfied. The night however was not over as all the artists and most of the artists moved across the corridor for an acoustic jam session until 4p.m.in the morning

Whitby etc. at their leisure and then returning for another super evening.meal The

different order and as Steve gad said at the beginning of the weekend no song was performed twice and it was truly refreshing to not hear any of the done to death non country pop stuff trotted out at supposedly "Country" venues in the guise of country to appease the line dancers. This is a real country event with a listening and attentive audience which unfortunately are few and far between now.

The last night Sunday arrived all too quickly with Kalibre taking the stage first as the guys had to travel down to their homes in Somerset to perform the next night and faced a journey of approximately seven hours after completing their set. This is a side that the audiences do not get to see and just shows the hard work and dedication of these artists to come to the venues to entertain us and it always annoys me when so many audiences show disrespect by talking loudly through their performances at some venues, fortunately not at this one After further brilliant sets by Travis Logan ,Middy it fell to Dave Paisley to bring this absolutely knockout weekend to a close with a great last performance..

putting on this weekend of pure country music magic and also all the staff at the hotel who worked tirelessly to serve us and give us a truly unforgettable weekend and roll on to next year's event.